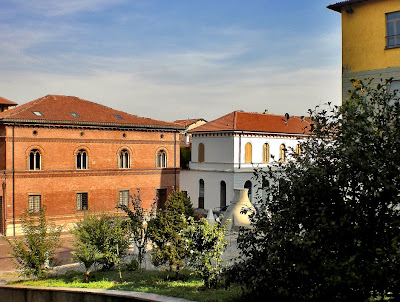 As I had promised yesterday while thanking you all for visiting my blog and for your comments, here are the two buildings I had mentioned. I took the photo with my back towards the church tower. The red one on the left was built at the end of the 14th Century, beginning 15th, and has been perfectly restorated to what it originally looked like (apart from the roof windows). The white one on the right dates its origins back to the second hald of the 16th century but was manipulated throughout the centuries and presents itself like this today. Both are officially listed and are now also protected with cameras positioned in the square.
They used to be part of a Monastery (Il "Monastero della Purificazione"). The building of the Monastery is still on the square but has been changed into a library and into private homes.

My home is on the first and partially on the second (under the roof) floor of the white building.
The window of my study from which I am writing to you is the third one from the left (front windows).
Posted by Diederick Wijmans at 17:36

This really gives me perspective. In the United States, we're lucky to still have buildings from the early 1900s -- those are our "historic" structures. :-)

THanks for sharing this with all of us. What a beautiful place to call home.

Thank you for the interesting glimpses from a country I am sorry to say that I have never visited, yet! (While listening to Andrea Bocelli)

Thank you for the pleasant comments!

Home sweet home indeed. A spectacular view from your study. I think I wlll go put Andrea Bocelli on and have a glass of wine in your honor.

That red brick is particularly striking!

Thank you too, Ilse!!

I'll do the same here, Virginia, and toast to you!!

Thanks for your comments, Kris!!

My head swims with the years you are talking about here - the red brick building was built in about the 1380s. To someone from Australia, as to Laurie from the US, that is just astounding! This is what I find so astonishing about Europe, and why I walk about over there as though I am on eggshells. Everything is so old and precious ...

Such an elegant old house and the view must give you inspiration.
It helps me to know where a blogger friend is sitting at the keyboard.
May you enjoy it to the fullest!

How lovely to be surrounded by so much history. I live in Canada, where most buildings were built in the last century, but my house was built in 1895... a little older than many homes. I love living in this old house, but it demands a lot of maintenance and TLC.