The mystery of the birds (without the bees) 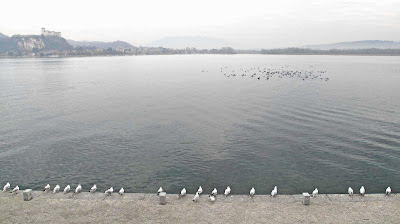 Hundreds of black waterbirds of the same species had arrived a few days ago taking possession of the harbour of Arona. This had evidently caused upheaval in our large colony of small lake gulls which usually share these waters only with swans and ducks. No high-pitched screeching sounds begging for bread these last days. Only some silent trials of fly formations diving onto the compact group of the invaders. This very afternoon, on the third and last day of their stay, the black waterbirds had moved towards the middle of the lake between Arona and Angera, forming an even more compact group than they had done before. Then, while I was walking along the lake, looking at these waterbirds, a large number of lake gulls suddenly arrived and positioned themselves on the long wall and on the pavement of the lake front. One next to the other. There were about sixty of them staring towards the waterbirds, as in this photo. No sound to be heard. A few lake gulls flew into the direction of the black waterbirds landing in the water in front of them but remaining at a safe distance. Then, about ten waterbirds made the same sort of move towards the lake gulls. A group of lake gulls suddenly flew from one of the lake front trees and landed behind the group of waterbirds and moved nervously backwards and forwards. It was fascinating to see these silent preparations for what looked like to become a territory battle. Then, suddenly one of the waterbirds flew up from the water and was in a few seconds followed by all the other ones and in their turn by all the lake gulls which seemed to accompany them out of sight. After a few minutes I saw them returning to their usual dominion: Arona's harbour. Intense moments indeed.
Posted by Diederick Wijmans at 17:27

How exciting! And you were there to observe and photograph this phenomenon!

It reminds me of the "posturing" that humans do here before a military operation or war.
Your birds had more sense.

These black birds were not ready for the fight may be they were pacifists :)

Great story, and how fortunate to have witnessed it with your lens. Thanks for sharing.

Great story but I really don't like seagulls so would have been hoping for the waterbirds to win.

The black ones must had to stop and rest from migration maybe. It does make an interesting story. A kind of territory dispute.

this shot is wonderful... your work is so amazing

What an interesting encounter to witness.

A little like the American equivalent of "circling the wagons'! Great story and shot!
V

Oh good, the war is over then. Reminds me of so many western movies