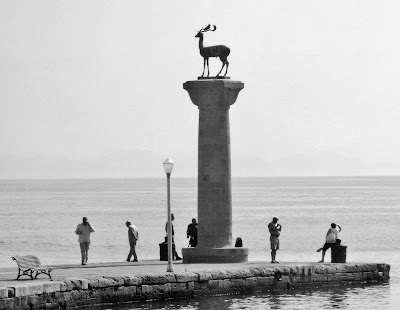 Elafos is one of the the two deer statues which today form the entrance of Mandraki Harbour (Rhodes), where once the legendary Colossus stood, a 31m high bronze statue erected between 292 and 280 B.C. ,by design of Charles of Lindos, and dedicated to the Titan God of the Sun, Helios, who was also the guardian of the Oaths and the God of gifts of sight. One of his daughters was the famous Circe, who could turn men into animals with her magic wand. The statue, considered as one of the seven wonders of the ancient world was said to have collapsed during a heavy earthquake in 226 Before Christ. Elafos and Elafina represent the symbol of the victory of the Rhodian deers over the enormous quantites of snakes which had invaded the island.
Mandraki Harbour, Rhodes
Greece
Posted by Diederick Wijmans at 07:21

The place looks peaceful and the shot is really very nicely done!

I like to imagine the powerful feeling of standing in that place.

I'm afraid here in Maine, USAm, someone would be taking a bead on him with their shotgun!

A timeless feel today. The human element makes it much more interesting as well.
V

PS I'm hungry for feta after reading your posts! HA