The old streets of Lindos 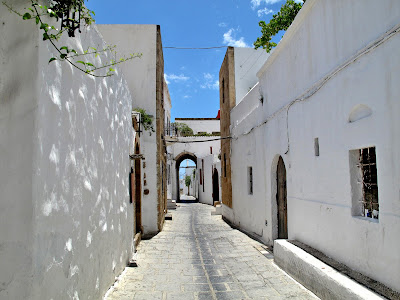 In the 6th Century B.C., seven wise men of Antiquity became known for their social and political wisdom: Thalis of Miletus, Pittacus of Mytilene, Solon of Athens, Bias of Priene, Chilon of Sparta, Periander of Corinth and Cleoboulos of Lindos.
Cleoboulos, the ruler of Lindos , boasted descendence from Hercules. He traveled widely and was well acquainted with Egyptian philosophy. He wrote poems, riddles and epigrams.
The only riddle written by him which has arrived to us is the following: The father is one and his children twelve. Each of the children has twice thirty daughters who have a different appearance: some are white others are black, some of them are immortal while others die.
The answer is: Time.
Lindos
Isle of Rhodes
Greece
Posted by Diederick Wijmans at 08:34

The picture looks like a place were time stands still.
Great riddle. I'm sending it on to my kids.

I love walking down these old alleys.

The white of these building really pops. Great narrative today. I am a little bit of a geek when it comes to myths and legends.

I am enjoying your photos of Rhodes. We were there, unfortunately for only one day, about 8 years ago during a cruise of he Greek Isles and coast of Turkey. I will look forward to seeing your upcoming photos.

Love the picture... I am in total love of Mediterranean blues and whites, and of course a street shot is perfect, a path to?

I really like that riddle. It's a shame more of his work hasn't survived.

Fantastic perspective. Thanks for sharing.

Well you found the shot I"ve been waiting for. Absolutely gorgeous. Beautiful perspective D. I want to frame this. Your text is lovely as well. I'm leaving my comments to revisit the photograph now.
V

I agree with Dina.

This would make a wonderful painting.

Thank you, my friends, for your comments!!

And here we go again said...

Hello! U have a splendid collection of photos. I'm a beginner blogger and i must honestly tell you that i visit your blog for inspiration. My husband shoots great photos as well. And I'm learning how to. Keep inspiring more like me. Cheers!!

Superb composition and an intelligent riddle. Loved this post! Thanks for sharing!

What a wonderful place, simply beautiful

great pic. i am inspired to paint it!