Dear politicians of the Italian Region of Basilicata 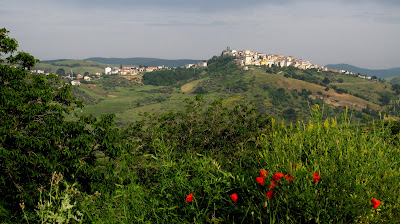 You really should spend more time travelling through your own region, like you did when you toured around in cities and villages during your election campaigns, to gain the trust and votes of your people.
Weren't you glad to meet all those people, seeing their smiles when you shook their hands, promising that things would be alright and become better for everybody? I can only immagine what sort of satisfaction it should give to make people so happy.
I am more than certain that you would enjoy that endless and magnificent countryside again, with those softly flowing hills of green pastures and yellow cornfields, those large valleys with olivetrees and vineyards, those magnificent mountains which have nothing to envy to the Italian Dolomites in the north. Please do not forget to visit the two silent lakes of Monticchio again, where you should listen to what they will tell you about Brahmea, the rare nocturnal butterfly which in the world only lives there. And then...remember the "Sassi of Matera"...? No words are sufficient to describe its beauty!
Yes, you would meet all those people again durng your travelling. People who gave you their support. You would have the opportunity to listen more carefully to their cry for support. No, we are not talking about money here, they just want to feel your support again, to understand that your promises are coinciding with their expectations.
They have suffered! You know that! They have been hit hard in their hearts and in their belongings by earthquales, landslides and other natural disasters, but they always managed to build their own daily life up again, without the support they had expected, these silent, stubborn but oh so friendly and hospitable people of the hills, mountains and valleys, who in a most dignified manner often live in self-repaired houses painted in a range of colours which probably do not even exist in the rainbow, when it throws its arch beyond the horizons, after the strong wind has blown away those rainy dark clouds.
They sit isolated in their ivory towers of power, is their answer when I ask them where you are. They do not care about our wines, our chestnuts, our olive oil, They only care about the oil underground...!
You know, dear Politicians, these people know all about the oil drillings which take place in the National Park of the Agri Valley. They heard the Greens talk about the tremendously negative impact on the territory itself, where intensive oil extraction is contributing to a clear degradation of local fauna and flora, where the extraction methods are causing a lowering of the groundwater table, which has triggered hydrological changes. The seem to know that such effects are not always easy to predict but may have far-reaching consequences for the region's future. They fear that Basilicata's renowned agricultural products are at risk because of the concentration of industrial chemicals brought to the region. They see this as a huge barrier to the development of agriculture and tourism in the region. Then they started really getting worried when WWF-Italy stated that the impact of the oil extraction in the region is negative in all its aspects: research, processes, transport and refining, with serious risks to air pollution (emissions of nitrogen, hydrocarbons, sulphur dioxide), pollution of groundwater, the hydrological disruption, the seismic risk, not to mention the problems related to waste disposal and impacts on biodiversity.
Today they heard rumors that further drilling research operations will take place on a larger scale and also towards the "Vulture area", where this generous vulcano has given fertile ground with rich and lush minerals to the cultivation of Basilicata's world-famous Aglianico del Vulture grape which produces top-level exquisite wines and of which the organoleptic qualtities are and have been extolled by world-wide well known prestigeous experts.
They are worried, dear politicians, very worried and they request from you that you do not let all his happen, that oil is not the answer for the future and that you should concentrate on alternative energy with the sun and the wind which are abundant in your area. They have indeed the right to ask this from you, because they have chosen you to make their voices louder, so that they can be heard beyond the bounderies of their magnificent territory.

You are an eloquent and convincing champion for the cause.

If only they would listen!

Oh DIederick,
We here in the US feel the same. Thank you for your well chosen words. If some will listen.
V

We have got to get ourselves off oil. It's like heroin. It's bad for us. Look what it's doing to us as a society.

So well said, Diederick. I hope they listen to you. To us. We need alternative energy sources.

This letter should send to all politicians in the world!
Greetings from Finland, also our politicians could get the letter!

But I have been interested your weather now few days because my son`s family is visiting Riva del Garda. They will be there three weeks and I have seen weather forecast, which promises over 30 degrees! Too much to me there - very suitable here, below 20 degrees ;)

Nice days to you!

Personally, I think that's a great letter to send to ALL politicians!

Your photo is magnificent as well.
V

Great letter, maybe the politicians should drill next to the parliament or under their own houses. See how they like it. Carla

Thank you all for your wonderful comments!!
It is a drop in the ocean but let's keep hoping at least one of them will listen!

It's hard to make them listen, especially if they think about bucks. Sadly it happens most of times and people is purposely disinformed by politicians.
However, screaming together we can spread the voice all around and win the battle. Let's do it, never walk alone!

Moving language, and so true.