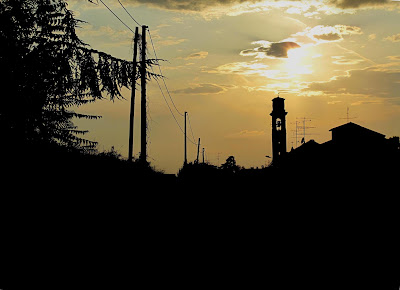 We left Arona at 14.00 hours sharp last Friday. We had an appointment at 16.30 hours with an important winery in Wine Paradise that same afternoon, to discuss the final details of the winetasting event we are organizing in New York for the end of September and of the forthcoming trip to Turkey to meet with the main wineimporters/distributors there. It had rained uninterruptedly from 4.30 till 7.00 that morning which had refreshened the air . Then a gentle breeze had swept away the clouds and I could see the lake glistening again in the sunlight in the back-mirror while driving up to the highway. 26° Celsius (79° Fahrenheit), an ideal temperature for travelling. We knew that there wouldn't be much traffic on the road as most of the Italians had already reached their holiday destination. The trees on the hills around the lake looked at their best showing off their lush green leaves. A perfect summer-day, we said. It couldn't have been better.
Then we left the Region of Piedmont and drove into the flat land of Lumbardy with its typical yellow and red ocre colour farmhouses. My wife looked at the indicator of the outside temperature which in the meantime had crept up from 26°Celsius to 30° (85° Fahrenheit). "I am not going to like this!", she said while remembering her preference for the climate of the more northern European countries. The esmerald green of the lands along the highway was slowly changing into straw-yellow while we proceeded, notwithstanding the hughe water-spouts trying to do the utmost to keep the land moist. Some far-away tractors moved like snales over the dry land and disappeared in swirls of yellow dust under a merciless sun. "I am not going to like this at all!", my wife repeated while staring at the red numbers on the black electronic device sticking out of the wall of a Bank: 36° Celsius (97° Fahrenheit) was the temperature of our final destination.
We opened the doors of our car and were welcomed by hot burning air. At least there isn't any humidity, I mentioned, trying to convince my wife to keep her good mood while leading her into the airconditioned winery. We stayed there for more that an hour defining our projects and when I looked out of one of the windows, I saw that the blue of the sky had in the meantime made way for that typical grey that promises a generous distribution of humidity. "Not a breeze whatsoever"!, said the porter of the winery while he opened the door for us wiping his forehead with a large handkerchief with the other hand. He looked soaked in his blue shirt. We took a deep breath and ran to the car which had baked in the full sunlight for over an hour. I immediately started the engine trying to ignore the 49° Celsius (120° Fahrenheit) that had flung on us like a hot wet towel.
"You look lovely all the same!", I clumsely tried to console my wife looking at her hair which the hairdresser had so carefully arranged that very morning and which had now lost every possible structure. I felt her beautiful green eyes piercing through my cheekbones and she did not say a word till we reached her sister's home where we were going to stay three days and two nights. It was only when she was given a glass of chilled Prosecco that I finally spotted a glimpse of foregiveness in her eyes, and I swear that I heard "psssss...." when we finally let our overheated bodies sink into the cool water of the swimming pool.
The end of a hot day in
rural Codevilla
Posted by Diederick Wijmans at 11:40

What a story. What a hot photograph. What a day. What a guy!

Oi. At least you made it to the swimming pool and the cold drink at the end.
Never saw such a long post on your blog. Hey, you are a good storyteller! I had to laugh at the "imploding." LOL
It has been in the 30s every day for almost a month here in Jerusalem. Even the WATER at the Mediterranean beaches is at 30 degrees.

my English is too low for me to understand all your history, but your photo is beautiful

I got totally caught up in this narrative and I'm supposed to be the one who can write. Riveting post and as always the image sublime. Most beautiful light.

Wow. It sounds like you had a hot time and glad there was a cool pool to cool off in.

I welcome you to Pick a Peck of Pixels blog. I am trying to make history there and you are not a part of it for which I am grateful. Thank you very much.

Nice story! An everyday event down here in the south...yesterday it was over 40°!

THe way I look at it, a cold glass of Prosecco and a cool pool will cure just about anything! What a great story. I'd feel sorry for the two of you but that's what Birmingham's like all summer except you must throw in a generous helping of humidity as well!

I leave Paris tomorrow. I will depend on you to cheer me up for a while!HA
V
V

So beautiful picture and a great story!
Léia

Wonderful story. We can relate down here in Naples -- it's been about the same temperature for days and days on end. Finally, we're fleeing North.

But I noticed your interest in wines. I'm wondering if you can answer a question. The Italians have wines that are both red and frizzante (bubbly). In California (where I'm from originally) a bubbly red wine necessarily means it's gone bad. Are these cheap wines? How did they come about and with what foods are they to be enjoyed?

Thank you all of you, and welcome home again, Virginia!!

Barbara, thank you for your comments. No, it does not mean that a red wine has gone "bad" if it "bubbly". The red dry sparkling Lambrusco is, for example, good with pork meat. Today there are quite a few wineries in the Emilia-Romagna Region that produce an excellent Lambrusco. I personally deal more with the still red wines but also with still as well as sparkling white wines.

Oh my goodness, well please tell your wife I sympathise! Am sure you are by now having a wonderful time, so long as the pool is available. I remember these temperatures when I lived in Cairns in north Queensland - in fact one of the reasons I left. Great story. I'm hot reading it and I'm sitting in airconditioning...