Fragments of the burgh of Orta San Giulio 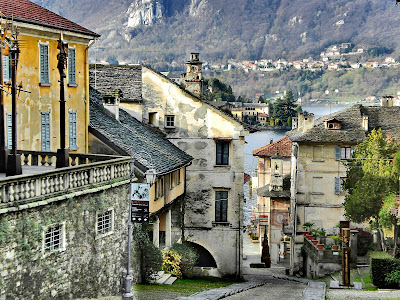 The origins of this beautiful burgh on Lake Orta, about 20km from Arona, date back to the 6th Century and even before. After various disputes between ruling families of the area and the Church throughout the Dark Ages and after, today's main urban morphology of the historical centre was shaped during the 17th and 18th century with some buildings dating back to even the 16th century. The Island of San Giulio in front of Orta's lake front which I posted some posts ago, hosts a few private villa's (one of which the proprietors open up for concerts in Spring). The main building on the island is a monastery of an enclosed order of nuns.
Posted by Diederick Wijmans at 07:56

You do live in a very picturesque location but I think your photos do justice to its beauty. This one is so beautifully composed, the way the steps lead down to a glimpse of the lake and then the eye is pulled further into the photo, trying to see more of the island.

What a beautiful scene this is. The steps down to the water and the colors on the buildings. It does look like a painting!

Magnificent! This photo does indeed look like a painting!

The terrain looks so steep, the buildings very old. I think I need to look up Orta San Giullo on a map to see exactly where it is. You've made me curious.

Gorgeous!!! You've choosen a fantastic angle to show us the burgh and the island.

I agree with everyone else - it is magical! Being from the US, I'm also struck by how old the buildings are - it gives it such texture.

I agree with Zsol, this photo is like a painting, is a beautiful photo!!

My ability with words cannot express how beautiful I find this photograph, Diederich. Your affection for the lake area is so very evident.

Benissimo, Outstanding! Like a painting, one can view this for a long time to try to take in it's beauty.

this view is just beautiful...