Tiny houses for the tallest people in the world 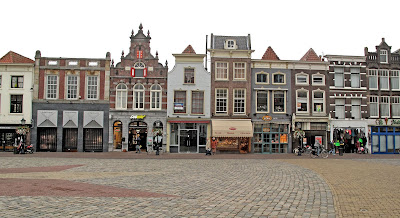 Statistically, the tallest people in the world, as measured by country, are the Dutch. The average height for all adults in the Netherlands is 1.85m. There are taller people belonging to certain populations like the Maasai, who live in parts of Kenya and Tanzania. But as a whole, the citizens living in Holland are on average the tallest people on the planet. The Dutch are followed by the Danes (1.83m). The Americans who used to be the tallest, have fallen on stature to an average height of 1.78m. Researches have attampted to account for what makes a certain country have the tallest people and conclude that factors for height include a combination of genetics and nutrition. Those who study these statistics suggest that the Dutch emphasis on early childhood care, a diet rich in dairy products and thus high in protein, and a fairly even distribution of wealth have contributed to making the Dutch the world's tallest people.
Main square in Gouda
Holland
Posted by Diederick Wijmans at 09:30

Great shot, interesting notes, but if they want to keep their title of 'tallest' they may have to examine their present food choices more carefully. The offerings you captured included a Subway, a chocolate shop, and a place that serves ice cream.

A guy living close to me was very tall (over two meters),as was his wife. They had five kids, all very tall.

You are right, brattcat! At the other hand, I recently noticed that there are very few really over-weight people in Holland. As they use the bicycle as the main means of transport to go to school and work, this exercise helps them to stay fit (and tall).

Personally speaking I (1.80m) am the smallest of the men in my family. I have a brother who is about 1.95m and had an uncle of over 2.05m. I saw that the average height in Germany is quite impressive, Steffe!

Being 5'2", I have to look up to almost everyone ! This row of charming houses reminds me of a fairy tale.
V

The Dutch, a people I can look up to!

I always sensed that, since all but one of my Dutch friends tower over me. But now you bring statistics. Good, thank you.
Pretty picture.